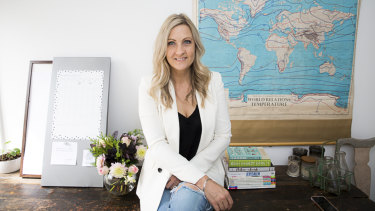 "Once upon a time people couldn't even care less," says Debora Schultz, the founder of Justice Denim.

Denim jeans are ubiquitous but their popularity comes at an environmental and ethical cost.

Denim is produced using large amounts of water and synthetic dyes and, like the rest of the fashion industry, manufacturers often rely on badly paid workers working in poor conditions.

Fashion businesses like Justice Denim are seeing growing demand for "woke" denim: a term for being awake to injustice and privilege in society.

Justice Denim is addressing this shift with its range of vegan-friendly jeans which use denim produced at a Turkish mill employing sustainable practices and jeans hand-cut, designed and distressed in Melbourne.

Every pair of jeans funds four weeks of education for a young child who has been rescued from the sexual slavery and illegal labour trade.

"For us, ethical production is a commitment to a different way of doing business," says Schultz.

The celebrity and television stylist decided to start Justice Denim after watching a documentary on child trafficking.

It took her 12 months to set up the business, find pattern makers and perfect her samples and Schultz used around $30,000 in savings to launch Justice Denim in September last year.

"I started by reaching out to ethical clothing and factories. It is a little harder in Australia because the industry has died quite a lot over the last 20 years," she says. "Fit is very important and I am very fussy."

Justice Denim is still a fledgling business but Schultz has sold more than  100 pairs of jeans so far and contributed money for 145 weeks of schooling.